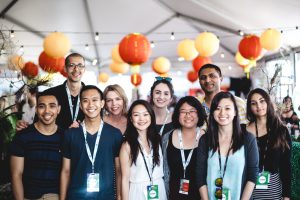 This year’s 20th Annual Sonoma International Film Festival was an incredible success thanks to all of the movie buffs, filmmakers, sponsors, partners, media, and volunteers that attended! More than 5,000 attendees enjoyed 135 films, plenty of parties, and breathtaking Sonoma weather. From opening drama “The Promise” to Sunday’s closing ballerina flick “Polina,” the festival was jam-packed with cool films, wine, beer, spirits, and parties.

Spritz is proud to be the official SIFF creative and marketing agency for the fifth year in a row. Big thanks to our 2017 film sponsors: Susan Atherton for nature mini-doc “Gardeners of the Forest, Anna Alioto and Michael Hogan of The Brenner Group for indie rom-com “First Comes Like”, The Bay Times for Scottish LGBT feature “Handsome Devil”, and Spritz’s own sponsored feature “Tunnel”. Our own Spritzer Raghu Shivaram also presented the film “India in a Day” with director Richie Mehta and Deputy Consul General of India Venkata Ramana, who sponsored the film.